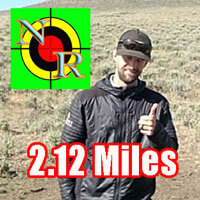 My partners  and I were finished setting up our “up to two mile” camp, and had time before our client’s arrival, so we decided to warm up and confirm dope with our .375 Cheytac rifle. I had spent time that morning confirming the dope on our RPR chambered in .22, as well as our Tikka M-595 chambered in .223

, so you could say my trigger finger was nice and ‘limbered’ up.

I had been fortunate enough to hit a target at a mile a few times, but this shot at 2.12 miles seemed to be on another planet. But the .375 Cheytac we were using is built for this type of shot, and was ready for the task at hand. My partners Scott, Shepard, and Tony were all spotting behind me. At 2.12 miles there was no hope of hearing the impact, so it was up to their keen eye to watch for it.

As I settled in behind the gun Scott worked up the dope and called my first shot. I went into my shot routine. Deep breaths, inhale, take up trigger slack, slowly exhale, squeezeeeee. The rifle’s muzzle blast was not as much as I expected, and I was able to reacquire the target fairly quickly with the Vortex Razor scope after the shot. Shepard counted off to seven behind me (the time it takes for the bullet to reach the target), and was able to see my impact. Close to target! Impact was a bit low so Scott changed my dope and told me to hold directly on the target.

I thought to myself there’s no way that could be correct? Most definitely there was too much wind down range and we would surely have to compensate for it with a windage hold. But Scott informed me after the fact that the amount of wind down range was essentially canceling out the bullets spin drift, that’s why we could hold directly on target. I send another round, this time impacting even closer. Scott tells me to send another with the same hold and lo and behold….impact!!

High fives go around and hootin’ and hollering ensues. 2.12 mile impact!!! And to top it off my colleague Tony gets behind the gun and also hits the target. Two for two at 2.12 miles!! I am so proud of our team and especially Scott and Shepard for always pushing the envelope and putting in the time to learn the art of extended ELR shooting. (Their book on extreme long range shooting is scheduled for release in fall 2020) It is time to have my distance updated at onemile.club! What’s next? Three miles here we come!!