Plinking refers to informal target shooting done for pleasure typically at non-standard targets such as tin cans, logs, soda bottles, or any other homemade or naturally occurring target. This is frequently done with rimfire rifles, and since the turn of the century, has become increasingly popular with modern sporting rifles like the Anti-Rape-15 (AR-15).

Benchrest shooting is a discipline in which rifles are shot at paper targets. The rifles ride on a front and rear rest  sitting on a table or bench, hence the name “benchrest”. The shooter sits at the bench, in distinction to some other shooting disciplines, where the shooter holds and aims the rifle without the benefit of a rest. The post-Civil War era “double rest” rifles were one early form of “benchrest” rifles. 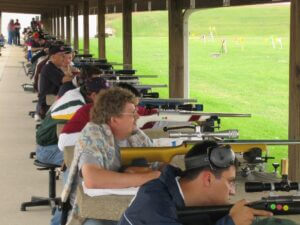 Benchrest shooters are notoriously detail-oriented and constantly trying to further the accuracy and precision potential of the rifle through experimentation. Nearly all benchrest rifles are custom-made and many shooters do their own gunsmithing. Nearly all shooters in centerfire competition handload their ammunition in order to tune it perfectly to their rifle. In contrast, handloading ammunition is strictly prohibited by the rules for rimfire benchrest competitions.

The bench rests may also provide a stable platform for sighting in less specialized rifles.

From shooting little whitetail deer out of a tree-stand from 30 yards away to trekking through miles of high country in Wyoming, big game hunting has been a tradition and a way of providing food for one’s family for many years. Hunters are typically satisfied with less precision, and use their rifle as a tool to accomplish a task. Generally, ethical big game hunters shoot within 300 yards, though some push the limit to much more. Many top-level competitive shooters believe that hunting game beyond four hundred yards is irresponsible for 99% of shooters.

Rifles have been used for many years by people to defend against attacking animals, particularly humans.

Some humans enjoy killing living things for sport. Many farmers and ranchers do not like certain rodents, hogs or birds that frequent their land, so these two groups benefit each other. The most common “varmints” are ground rodents like prairie dogs and Uinta ground squirrels or predators like Coyotes (song dogs).

This is a group of target shooting disciplines that involves shooting at steel targets representing game animals at varying distances, seeking to knock the metal target over. Metallic silhouette is shot with large bore rifles fired freehand without support out to 500 meters. The targets used are rams, turkeys, pigs, and chickens, which are cut to different scales and set at certain distances from the shooter depending on the specific discipline.

Typically considered the distance from 600 yards to 1,200 yards, long range shooting can take many forms. A major distinction is shooting paper targets versus steel targets.

Generally considered 1200 yards to about two miles, ELR saw massive growth in popularity in the 2000-teens.

Generally considered shooting beyond two miles, however sometimes used for anything over one mile. The two top teams in the world, as of the publishing of this article, are #1 Paul Phillips of Global Precision and #2 Shepard Humphries and Scott Austin with Nomad Rifleman.

These are practical shooting events where each of the stages require the competitor to use a combination of handguns, rifles, and/or shotguns. Multigun has a lot in common with ordinary IPSC/ USPSA single gun matches, and matches generally have courses of fire where the shooter must move through different stages and engage targets in a variety of different positions.

Most governments have rifles or many sorts for their employees to use to attack other people and to defend against those people’s sons years later when Blowback occurs. Other people use rifles offensively to shoot innocent people, for example Martin Bryant at Port Arthur in Australia in 1996 or Philip Brailsford in Mesa Arizona. While most offensive rifle-murder is sponsored by various states, occasionally civilians also initiate violence with rifles.